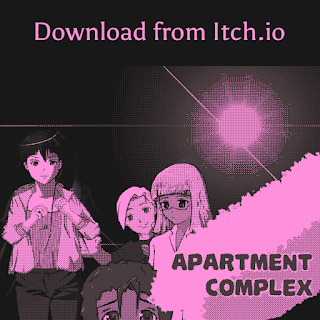 Apartment Complex in development for SuNoFes

Just a quick one!

I am taking part in SuNoFes again this year - more info on the jam here: sunofes.org

My game is going to be called Apartment Complex.

I've been working on BGs and I have nearly 2 finished, I think I'll need at least another 4 though! There's lots to do, but I'm quite busy with work this summer, so I might need to find a quicker approach to some of the assets to get it all done by the end of August.

I'll try to write another update in a week or two. At that stage I will probably also create a work in progress thread on the Lemmasoft Forum.

Yes the title says it all.

But here is a picture and a link!

Oh I should post something on my blog to say I'm doing nano:

The game is called Connection Pools, it's got a sci-fi vibe. I really don't want to say too much about it, because I think it might ruin the fun a bit!

Instead I'll post a little wip art and the link to the LSF wip thread and leave it at that for now.

Version 6.99.8 of Ren'Py which was released in December 2015 includes these cool new warpers for making animations look smoother/more natural and/or more interesting!

You can see what sort of effect you get on this site:

And here is the Ren'Py documentation:
http://www.renpy.org/doc/html/atl.html#warpers

I thought I'd share a little bit of example code for using the cool new warpers in Ren'Py.


Here is my code using the easein_back movement:

I have this in my Script file, with the other images I am declaring:

And then in the game it's just a matter of showing the image:


The code after the image declaration shows the image at the location provided by xpos and ypos (in this case 250 and 750) then using the nice easein_back movement it goes to the new xpos and ypos ( the 2.5 you see in my example is the amount of time in seconds this takes and the 550 and 500 are the new positions).

Later after "label start:" (i.e. somewhere in the main script of the game) it's shown with the show statement. In my example I also added a 4 second pause and the hide statement, they aren't needed at all for this, but I've included them just in case it helps anybody out at all.

It should have been fairly obvious to me that "easein_back" should go in place of "ease". But... I've never really used "ease" - all my old ATL code uses "linear", which is why I spent a while figuring out how to use these functions! I know I always get on better with code examples than I do with documentation (especially when I'm trying to do something quickly!).

And of course to renpytom (https://twitter.com/renpytom) for including them and Robert Penner (http://robertpenner.com/easing/) who, like, invented the original code :D
Posted by T Stevens at 11:40 No comments: